We are proud to recognize our very own Caleb Doerr for all he has accomplished in his apprenticeship!

On May 14, the Pacific Northwest Carpenters Institute (PNCI) held the Carpenter apprentice graduation ceremony where Caleb was awarded Exterior Interior Systems Apprentice of the Year. This honorable accolade recognizes the efforts of apprentices in the program who complete the following criteria: 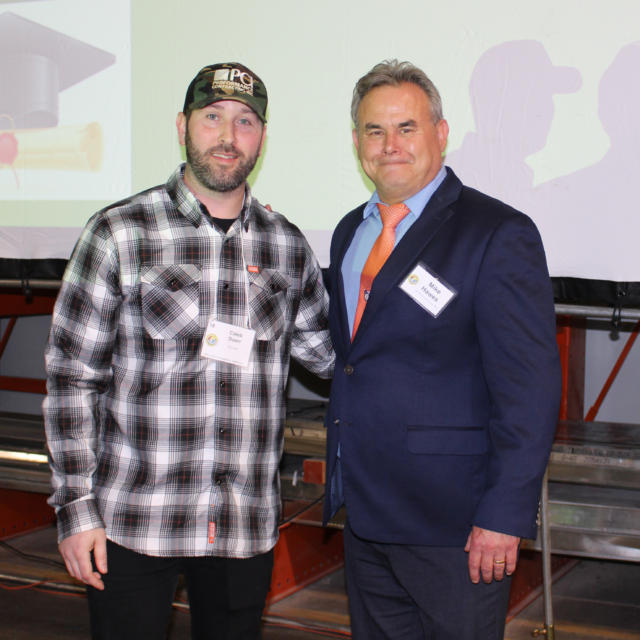 Additionally, a letter of recommendation from a supervisor is required. Here’s what his Superintendent — Jamie Oliveira — had to say about him:

“It has been my privilege to watch Caleb grow in his life and career. I feel that it is the least I can do to recognize him for his excellence and give him an opportunity to be acknowledged as he continues to strive for excellence.

Caleb’s acceptance speech says a lot about him.

“The apprenticeship and union changed my life. Coming into the trades as a utility with no real knowledge or experience, I didn’t know what to expect. Over the course of the apprenticeship, that quickly changed. From the skills learned on the job and through the training center, the friends and mentors made on the jobsite, and the consistency of a strong workforce, I have been able to give my family the future and security that they deserve. The skills learned along the way have been applicable to all aspects of life. Framing, drywall, ceilings, etc. have only been the beginning. I have also learned great life skills in being surrounded by so many people in different walks of life. PNCI and the union helped take a utility with no trade skills and helped that utility journey out as a foreman with the skills and knowledge to help the next generation of carpenters grow into the best they can be as well. I will be forever grateful for what this union has done for me.”

During the ceremony, PCI Portland was also presented two awards for its Diversity & Inclusion efforts:

Both Diversity & Inclusion awards were based on hours reported to the Oregon and SW Washington Trust for January 1 to December 31, 2021.

We are incredibly proud of Caleb Doer for his dedication to the craft, and the Portland Interior branch for their commitment to elevating our communities. Our Core Values were truly represented at the PNCI Graduation Ceremony.